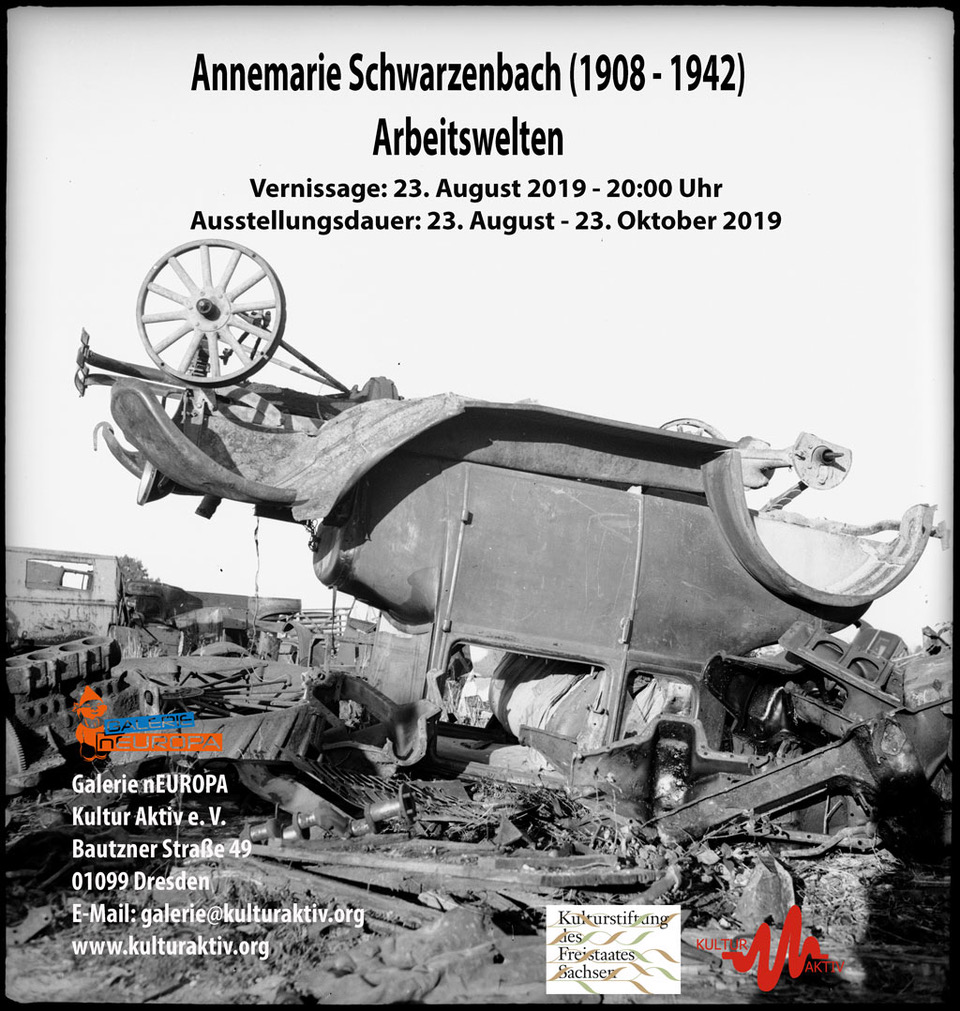 In this exhibition, which will be realized as part of the project “VERTOVISm-WORLDWIDEWORKnoise“, we want to focus on a special field in the photographic work of the Swiss artist Annemarie Schwarzenbach (1908-1942), the working worlds she documented. In Gdingen am Gotenhafen, on the coal transshipment site, she composed constructivist-looking working realities concentrated on elementary lines and forms, determined by the skilful choice of angle and detail. These stand in stark contrast to her photographs of archaic port worlds in Estonia or in the Belgian Congo. Here the technique does not dominate the detail, here the simple hard human work dominates the harbour reality.

“Anyone who met her fell in love with Annemarie Schwarzenbach, the pageboy, graceful, lightning-sneaky Horgen factory owner’s daughter, who earned her doctorate at the age of twenty-three and confused traffic with her sports car just as much as her parents, Bocken, with their unconventional behaviour. […] But her own family attested her nothing less than ‘moral depravity’, because instead of marriage candidates from good houses, General Willes’ granddaughter born on 23 May 1908 loved girlfriends like Erika Mann, Therese Giehse or Carson McCullers! In male partners only feminine, ephellenic types, if at all, came into question: Klaus Mann, whom she tenderly revered, or the diplomat Clarac, whom she married in order to escape family care as a Frenchwoman. Since 1930 she belonged to the circle around the man-children Klaus and Erika, with whom she shared not only their literary ambitions, but soon also their preference for alcohol, morphine, rapidly changing friendships and uninterrupted travelling. […] Her professional specialty, however, was the personally colored travel feature, illustrated with her own photos. […] A talent, yes, but one that had to be bought on an intimate level – with a chain of nervous breakdowns, suicide attempts, drug poisoning, detentions, and withdrawal cures. Until in 1940 – following German literature into exile and switching to English – it fell into the clutches of American forced psychiatry and broke up internally. Having returned home to Sils-Baselgia in the Engadine via the Belgian-Congo stopover on an adventurous journey, she died, according to the official version, on 15 November 1942 at the age of 34 from the consequences of a bicycle accident. This lexical extract by Charles Linsmayer is brilliant, charming and idiosyncratic, as is an extensive biography under the title “Annemarie Schwarzenbach. Ein Kapitel tragische Schweizer Literaturgeschichte” was written. The travel journalist and photographer worked for Swiss daily newspapers and magazines and left us excellent stylistic pearls that can sometimes be read confidently as prose poems.

The exhibition is the first part of the project VERTOVISm-WORLDWIDEWORKnoise, sponsored by the Kulturstiftung des Freistaates Sachsen, the city of Dresden and in cooperation with Morphonic Lab 2019.