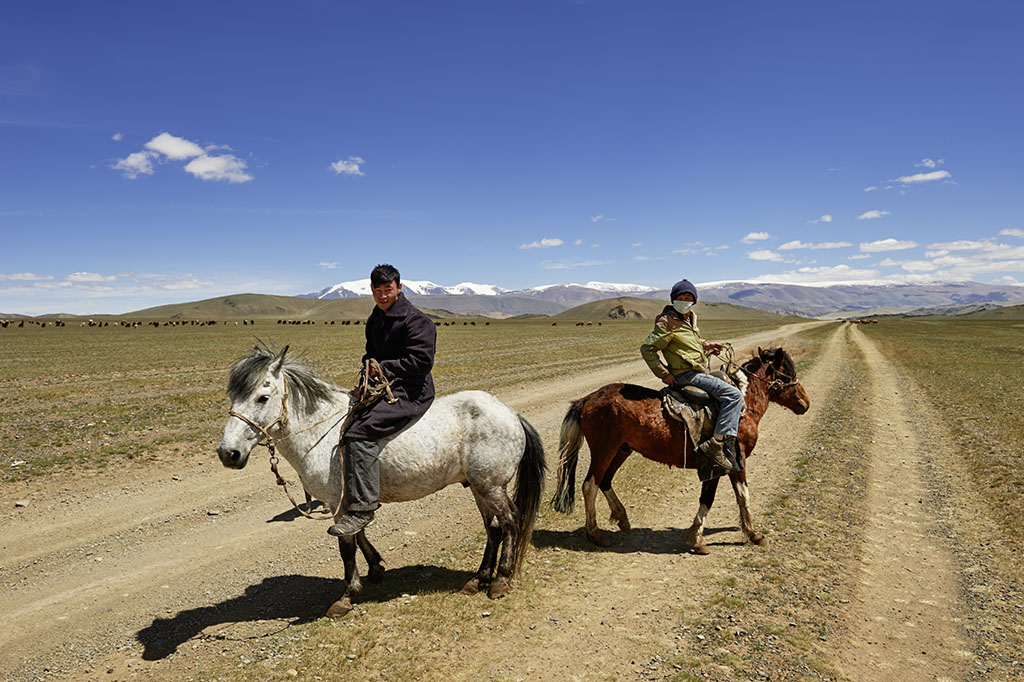 Horses, yurts and an endlessly wide horizon shape the image of Mongolia, not only as a cliché of foreign tourists. The lifestyle of the nomadic herdsmen is firmly anchored in the Mongolian self-image. And this is despite the fact that modern Mongolian society has long since replaced horses as an everyday means of transport with cars and motorcycles, most Mongolians today live in stone houses instead of yurts, and the horizon in the settlements is usually blocked or – especially in Ulaanbaatar – obscured by smog.

Livestock breeding was the dominant economic sector in Mongolia until the middle of the 20th century. Collectivisation during the socialist period and privatisation in the period after the fall of the Berlin Wall meant that currently around two thirds of the population live in towns and city-like settlements. Almost half of the 3.3 million citizens live in the capital Ulaanbaatar alone. Those who want to participate in modern life, those who want to achieve something in the sparsely populated country, try their luck in the capital.

With the change of political systems, the world of work also changed. Today, the most important economic sectors are the service sector and mining, and this forces the need to build a modern infrastructure. In the settlements and cities a lot is built, the yurts give way to brick buildings. Goods are mainly transported by truck, still on a network of “wild” tracks. Since 2013, a government programme has been underway to expand asphalt roads, which should bring rural areas closer to the capital.

The same applies to the digital infrastructure. A solar cell and a satellite dish have long been placed in front of each yurt. The mobile phone network is well developed, at least in the vicinity of settlements, and public W-LAN networks are available in the area centres. And there are now not only more horses in Mongolia, but also more mobile phone contracts than inhabitants. With access to mobile phones and the Internet, even yurts far away from the settlements are moving closer to the capital and the world. This gives their inhabitants a wider horizon.

For the project Vertovism – WorldWideWork Jan Oelker has selected exemplary photo series of three working areas, which span the arc from the traditional working world of shepherds to the modern working worlds of settlements in the fields of construction and transport.

Jan Oelker has been photographing since the mid-1980s in the countries of the former Soviet Union and the former Eastern Bloc. The focus of his photography is on the relationship between people and their environment and the changes in everyday life caused by the transformation processes in the societies. In 2013 he travelled with friends to Mongolia with a Robur. In the widely scattered settlements they experienced the hospitality of the shepherds and gained insights into the everyday life of the people in the rural regions, which is so different from that in the capital Ulaanbaatar.

The exhibition is the first part of the exhibition organized by the Cultural Foundation of the Free State of Saxony, the City of Dresden and in cooperation with Morphonic Lab 2019 funded project VERTOVISm-WORLDWIDEWORKnoise.

Supported by the Cultural Foundation of the Free State of Saxony. This measure is co-financed with tax funds on the basis of the budget approved by the members of the Saxon State Parliament.