The neighborhood Užupis in the Lithuanian capital Vilnius is quite similar to Dresden’s Äußere Neustadt. It’s a neighborhood of old buildings that weren’t destroyed during WWII, it was forgotten and abandoned during the socialist era and it has become a niche for artists and dropouts. During the last 25 years Užupis went through a swift transformation into an attractive and hip neighborhood, including all the gentrification problems. At the vernissage on 06/12/2014, 7pm at Galerie NEUE OSTEN, there will be the opportunity to discuss this with the artist Marius A. Nebosia. Marius Nebosia will also represent Užupis during the BRN at a symposium of micro nations. Small is beautiful ;-).

The photographers, who show various different historical, social, architectural or every day aspects of the creative micro nation, make you reflect on the own micro nation, the Bunte Republik. That is because not only Dresden Neustadt, but also Užupis has dared to become a micro nation. As a part of an art performance, some locals declared the independent republic of Užupis that has a constitution, a flag and a president. The army of 12 men was soon disintegrated, because nobody was afraid of the republic. The café Užupio Kavinė serves as parliament building, where the constitution has been written down on a bronze table.

Užupis celebrates its independence every year on April 1st. On this day, there are elections and parades. Also, only on this day there is a currency and border checks. A memorial that became the new symbol of Užupis was uncovered. The sculpture depicts an angel symbolizing the neighborhoodd’s artistic freedom through playing the trumpet. 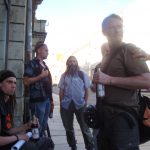 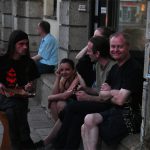